Film / Murders in the Rue Morgue 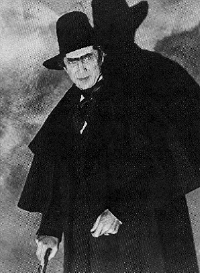 "Will my search never end?"
Advertisement:

A horror movie by Universal from year 1932. It is an adaptation of The Murders in the Rue Morgue by Edgar Allan Poe. The film changes a lot from the original short story, turning a murder mystery into a typical Universal Horror Mad Scientist tale. However, it keeps just enough intact, so there are major spoilers concerning it.

It is the year 1845 and a carnival has come to Paris. One of the sideshows feature a man named Dr. Mirakle (Bela Lugosi) and his gorilla Erik, which he touts to be the missing link between man and ape. He spends his free time by trying to prove this claim, namely kidnapping women and injecting them with Erik's blood to find out if they are compatible.

This method proves to be fatal to his test subjects and the string of bodies he is leaving behind attracts the curiosity of the medical student Pierre Dupin. Coincidentally, Dr. Mirakle has took interest on Dupin's sweetheart Camille, as Erik has took liking to her. Perhaps she has the right type of blood?

Not to be confused with the 1971 film of the same name, which has practically nothing to do with the Poe story except the name.

Examples in this movie: