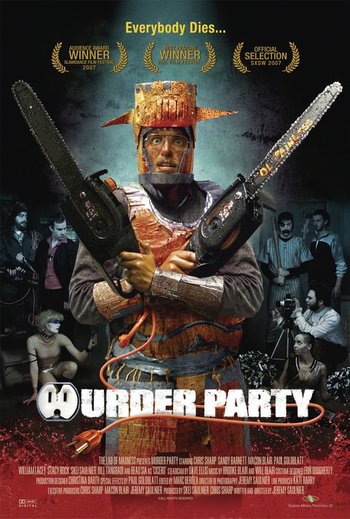 Murder Party is a 2007 Horror Comedy by Jeremy Saulnier and The Lab of Madness about a hapless loner named Chris Hawley who decides to attend a party that he found an invitation for because his cat wouldn't move from his chair to let him watch the videos that he rented. Unbeknownst to Chris, the invitation that he responds to is for a literal murder party hosted by a group of five deranged, but fortunately not terribly competent artists who intend to kill him as a part of an art piece in order to appeal to a wealthy aficionado named Alexander.
Advertisement:

Chris's captors make several attempts to eliminate Chris, all of which go hilariously awry. Chris has to use his limited wits to make an eventual escape after the party breaks down into all out havoc.