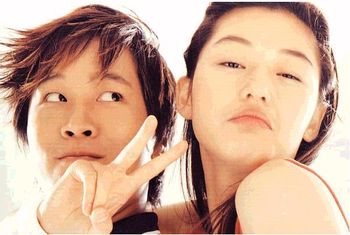 My Sassy Girl (엽기적인 그녀) is a South Korean romantic comedy movie from 2001, written and directed by Kwak Jae-yong. It was a massive hit when released in Korea, and has spawned an American remake, a Japanese drama series remake (Ryokiteki na Kanojo), a Bollywood version (Ugly Aur Pagli), a Tollywood version and a Chinese sequel named My Sassy Girl 2. The events in the movie are more or less a true story, based on series of love letters that were initially posted online.

The story is mostly told through a flashback. The plot basically involves Gyeon-woo, a milquetoast college student, who falls in love with a crazy domineering girl (who remains unnamed in the film) that he meets on the train. As she calls him "honey," and people berate him for not taking care of his girlfriend properly, he feels the responsibility to take care of her, and help her deal with whatever issues she has. This turns out to be quite a task.

While Gyeon-woo, played by Cha Tae-hyun, plays his part excellently and with no hint of irony, the star of the movie is without any doubt Jun Ji-hyun as the titular sassy girl, who comes off as simultaneously infuriating and utterly charming.

The American remake is considered to be extremely embarrassing.