Film / Love Is a Many-Splendored Thing 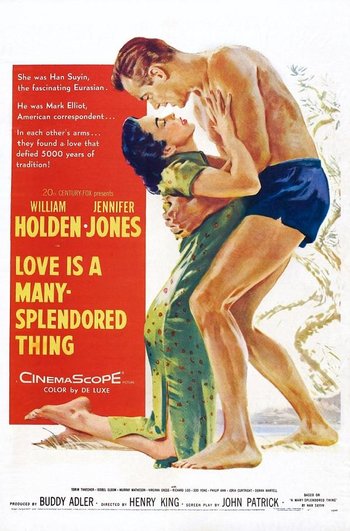 Love Is a Many-Splendored Thing is a 1955 American romantic drama film directed by Henry King, based on the 1952 autobiographical novel A Many-Splendoured Thing by Han Suyin.

Set in 1949–50 in Hong Kong during the Chinese Civil War, the film tells the story of married, but separated, American reporter Mark Elliott (William Holden), who falls in love with Eurasian doctor Han Suyin (Jennifer Jones). Although they find happiness together, Han is ostracized and prejudiced by her family and by the greater Chinese community.

The film later inspired the 1967–73 CBS Soap Opera Love Is a Many Splendored Thing (notice that it's written without the hyphen), which at first was a sort of Spin-Off that centered around Mia Elliott, the daughter of Mark and Han, going to San Francisco to live with her father's family; however, around half a year in the character was written out (due at least in part to network censors' concerns over having an interracial couple as the leads) and the show focused afterwards on the Elliott and Donnelly families.