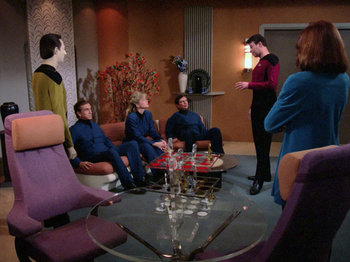 "Alright, it's been 400 years, so you'll be seated for a while."
Advertisement:

Picard is away, so Riker gets the Cool Chair, and the Enterprise has encountered an old space capsule from Earth. Data pushes to investigate it with Worf, and they find three Human Popsicles whom they beam back aboard the Enterprise. When Picard returns, he immediately orders Geordi to plot a course for the Romulan Neutral Zone. At a staff meeting, we learn that the Romulans have not had any contact with The Federation for decades. Picard explains that the Federation has lost contact with its outposts along the Neutral Zone, and Starfleet is sending the Enterprise to investigate. Their orders are to avoid a military confrontation if possible.

Meanwhile, Dr. Crusher has the people from the capsule asleep in Sickbay. She explains to Picard that they were placed in cryogenic freeze after dying of then-terminal illnesses, but now they have been easily saved by modern medicine. Picard is less than enthusiastic to have to deal with three 20th century yokels on his ship during such a critical mission. He delegates Riker to handle them. They are Sonny Clemonds, Ralph Offenhouse, and Clare Raymond. Ralph is eager to reconnect with his 20th century fortune, Sonny is curious about what you do for fun in this modern age, and Clare grapples with the fact that everyone she ever knew is dead.

Meanwhile, Picard is trying to decide what approach to take with the Romulans when they arrive at the Neutral Zone. Troi tells him that the Romulans will make no first move and will look to react to the Federation's action, a species of "counterpunchers." The other officers advise a range of postures to take, from aggressive to diplomatic. But as they confer, an impatient Ralph commandeers a communication panel to make demands directly to Picard, forcing the captain to deal with his unwanted guests directly. Picard dresses down Ralph for his obsession with wealth, though Ralph notes that his wealth did, in fact, save his life. Their argument is interrupted by Clare bursting into tears, so Picard has Troi visit her. Troi cheers her up by looking up her family tree and finding her descendants, one of whom looks exactly like her husband. Through it all, Sonny is quite content to drink replicated martinis and strum on the guitar that Data had made for him.

The Enterprise makes it to the Neutral Zone and finds that not a single trace of their outposts remains. When a Romulan warbird begins to decloak within Federation space, Worf urges Picard to exploit this one and only moment of weakness and blow them up before they can attack, but Picard refuses. The Romulans hail them and insist that their outposts have suffered the same fate as the Federation's. Both sides bicker over the Romulans' unwelcome presence in the Neutral Zone, and things start to look bad. But then Ralph pipes up, having found his way to the bridge. He notes that the Romulans are just as clueless about what's going on as the Federation and are simply posturing to try to see if the Federation has any clue. Although angered by Ralph's presence, Picard recognizes the truth in his observation. He suggests that both sides cooperate to investigate what has happened to their outposts. The Romulans make no promises, but leave in peace. And so, at the very least, a potential intergalactic war has been averted.

The mystery of the outposts will go unsolved, though a throwaway line in "Q Who" will suggest that the as-yet-unmet Borg were behind the attacks.

Picard then arranges for their three passengers to head back to Earth on the USS Charleston but then Geordi informs the Captain that the Charleston will be making an extended stop during her journey back to Earth. Geordi suggests the Enterprise take their passengers to a nearby starbase which will allow for faster transport back to Earth. Picard decides to dump them on the Charleston as planned so the Enterprise doesn't need to backtrack, justifying that the extra time will give them a chance to acclimate before arriving on Earth. He stares out into the vast reaches of space and notes that that there's still so much to do. He sets a new course, and the Enterprise whisks away to its next adventure.