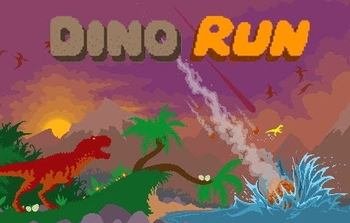 Dino Run is a Flash-based Platform Game developed by PixelJAM Games and XGen Studios and released in 2007, which follows a dinosaur as it attempts to survive the end of the world.
Advertisement:

The game is Exactly What It Says on the Tin - the player controls a dinosaur as it runs through several levels filled with pitfalls, other dinosaurs, and an Advancing Wall of Doom that is destroying the landscape behind them. Along the way, players can pick up power-ups that will boost their speed, strength or jump power, as well as collectible eggs that unlock further content.

In addition to the original game, a Speedrun-centric minigame called Dino Run: Marathon of Doom was released in 2011, which focuses on a single stage where the player dinosaur must survive as long as possible, as well as an Updated Re-release, Dino Run SE, that adds more levels, an extra gamemode and plenty of new hats.

Play it for free here

A sequel, simply named Dino Run 2, is in the works. It was first announced in 2014 but was shelved until further notice after the associated Kickstarter

failed to reach its goal. In the meantime, the developers were crowdfunding an updated Updated Re-release Dino Run DX until September 2017 when the developers decided to make Dino Run 2 possible again; more information can be found here