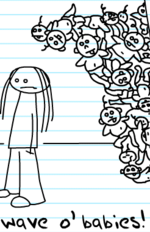 Don't look now, but there's a giant wave of babies.
"No more a rake and no more a bachelor
I was wedded and it whetted my thirst
Until her womb started spilling out babies
Only then did I reckon my curse!
— The Rake, "The Rake's Song" from The Decemberists' The Hazards of Love
Advertisement:

An actual wave of literal babies. In massive amounts, unstoppable, they sweep over all. Possibly gurgling the whole time. It can be of any species, especially ones that reproduce at an alarming rate. Usually a metaphor for the anxiety of parenthood, or the world’s overpopulation problems, but sometimes it’s just thrown in for random humor. See also Too Many Babies.