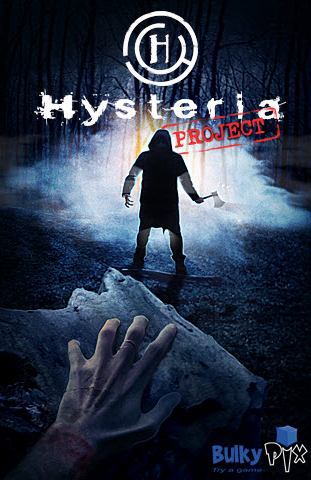 Take Dragon's Lair. Replace the animation with live-action video shot in the first person, the fantasy genre with Survival Horror, and its multiple arcade and home console release with exclusivity on iOS devices and PSP. You end up with Hysteria Project.
Advertisement:

... Not descriptive enough for you? Okay, we'll try our best to elaborate, but bear with us.

Hysteria Project was made by BulkyPix and released in 2009 for iOS (2010 for the PSP version) and casts you as an anonymous, mute man who has been locked up inside of a shed, who bears a strange tattoo on his arm. If you don't escape quickly enough, another hooded man will barge in and kill you. It's up to you to save yourself and figure out who you are and why you're wanted dead. Clues are scarce, and the threat of your would-be assassin is always on your heels. Start running.

It was followed up with Hysteria Project 2 in 2011, again for iOS and PSP. That game also ends with a "To Be Continued" screen; since then, however, no continuation has emerged.

This series demonstrates examples of: