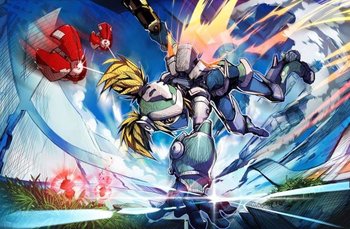 Cloudbuilt is a 3D action platformer game developed by Coilworks and published by Rising Star Games. It was originally released for PC via Steam in March 2014. An updated version, Super Cloudbuilt, was released for Steam, Playstation 4, and Xbox One in July 2017.

Players take on the role of Demi, a young soldier who has been critically injured in a war. With her physical body comatose and her consciousness exploring a strange new world made of floating landmasses created from ruined buildings. Demi takes it upon herself to explore this new world, aided by a jetpack and blaster, in the hopes of discovering its secrets and coming to terms with her physical state.