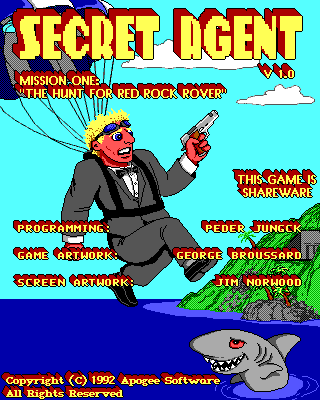 Secret Agent is a 1992 side-scrolling Platform Game released by Apogee Software (now 3D Realms) and based on the engine of the earlier Crystal Caves. Much like its predecessor, it was released as three games and licensed as shareware: the first game is free as a teaser, while the other two were made available for purchase (and can be still bought from 3D Realms or from GOG.com

The games feature a secret agent, who, throughout the series, infiltrates the islands occupied by the evil organization DVS. Each island is covered with DVS bases where our intrepid agent faces villainous guards and dangerous robots, along with many traps, while trying to find and destroy the radar on the level and then blow up the elevator door to escape. On the final level, the agent seeks out blueprints; collecting them and exiting the base ends the game and treats you to a nice picture as your reward.