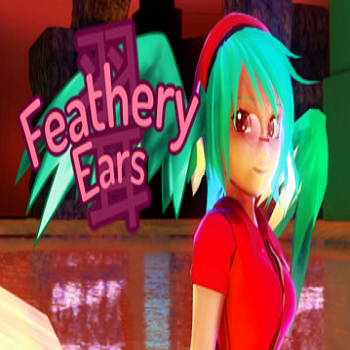 Feathery Ears is a 3D Collectathon Platformer by Sayuri Artsy, made using assets from the developer's previous game, Wings of Glass. It was released on November 10th, 2019 for PC through Steam.
Advertisement:

It begins in the real world, where we follow a socially isolated but artistically gifted young girl named Ashley Dengra. One day, she comes home after school and draws up a character named Misa Ikko, a girl with feathery ears and a long bird's tail. Then, Ashley spills a pot of paint onto herself, which also disturbs Misa; from then on, the game follows Misa's exploits in the world Ashley drew up.

Misa Ikko wakes up on the beach, where she learns that all the stars have been pulled from the sky by creatures called Gembugs. After receiving a fire sword from her friend Coral, Misa sets out to restore the stars to the night sky.