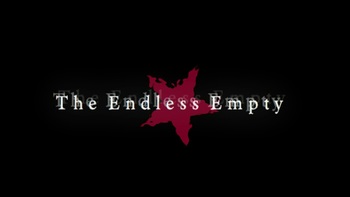 The Endless Empty is a videogame made by Erik Sheader-Smith using RPG maker VX Ace and released both on Steam and rpgmaker.net in November 2018. This game has been described as "a surreal post-life adventure", taking place solely in the mind of a dying man.

A person has just died, but hasn't completely accepted it yet. His brain is trying to come to terms with this grim event, disconnected form reality and in a state of degenerative decay. The mind's inner structure has been thrown into chaos: the memories are confused, the details have been erased, no personality, friends or family can be recalled and no clear view of reality can be grasped. For the mind's denizens, the world is steadily coming to an end.

What remains of memory is a confusing wreck, but there is a truth hiding among those fragments. There is a story, there is a way to go on and there is a persistent, intoxicating presence. There is the memory of her. Of the rockstar, her composer and the music they made together. What is the link between this story and the mind's ongoing ruin? That is up to the characters to find out.

The Endless Empty is an adventure RPG focused on exploration and choice. It delves deep into the idea of death and afterlife as the characters, odd incarnations of mental concepts such as Anxiety or Logic, must ask themselves questions as "Now what?", "What if I lived my life wrong?", "Is there even something after this?". The trip will send the characters through a surreal view of the mind's realms that remain operational while resolving puzzles, fighting bizarre enemies and coming face to face with the idea of Death.

) and its music, which mixes classical, funk, rock and electronic rhythms to make you feel the atmosphere of the surrounding realm.

The release trailer can be found here

The Endless Empty contains examples of: