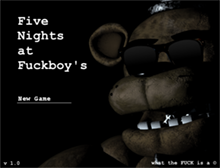 Are you Freddy for ready?
"inhale my dong enragement child"
— Freddy, Toy Freddy, and Springtrap, each time they speak to Balloon Boy.
Advertisement:

is a series of Five Nights at Freddy's fan games made in RPG Maker VX Ace by Sable Lynn (Sablesugar) and Joshua Shaw. It is a very crude take of FNaF that puts the player in the role of the animatronics battling party favors and recruiting other animatronics to join the player. The ultimate goal of the games is to defeat all of the Security Cameras and then battle the Final Boss. Despite being the same genre and featuring the same characters as Five Nights at Freddy's World, it has an entirely different tone.

On August 23rd, 2016, Five Nights as Fuckboys 3.5: Chain of Blunts was announced; which will return Toy Freddy to the spotlight in an adjusted card-based fighting system. According to pre-release information, it will be an even bigger scope than 3.

On April 20, 2017, Five Nights at Fuckboy's 3 was updated to what is denoted as the "Vile Edition" (version 1.4). It provides some further backstory to events found throughout the series. On the same day, the demo of "Chain of Blunts" was released.

The nightmare factor of the original games isn't present, instead opting for full, profane, nonsensical humor. A Compilation Rerelease of the entire trilogy remade in RPG Maker MV with enhanced features was set for release in 2016, but was canceled. In its place, the Complete Collection

, developed by ZainWD, was released in March 2021, providing new enhancements and overhauls to the game's visuals and combat system.

, the VR sequel to Five Nights at Fuckboy's 3 was announced, but ultimately canceled.

series of fan games by RottyTopaz have been endorsed by Sable and Joshua, and thus portions of those games are covered as well.

NOTE: Be mindful of the unmarked spoilers regarding game mechanics; various combinations may not necessarily achieve the same result and the particularly ambitious player could subvert them if they modify the game files using RPG Maker VX Ace.