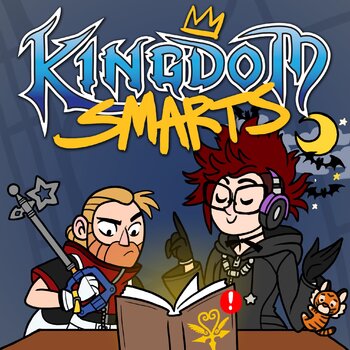 Kingdom Smarts is a podcast beginning in July 2017 hosted by Shannon Manor, lead character designer of Archer, and Jake Mason of Hey! Jake and Josh.

The premise is simple: every episode, Kingdom Hearts fangirl Shannon has thirty minutes to explain the story of the franchise to Jake, who has managed to know absolutely nothing about it until the podcast began. Alongside recapping the plot Shannon also gives asides on her favourite characters, gameplay elements, and fandom notes. Of course Jake also intervenes with reactions, thoughts and theories on what he's being told, and occasionally crying.

The delivery is as straightforward as the story of the franchise.

The show runs through the games of the series in order of release. As of December 2020 they have covered the following games, with bonus episodes between series for them to catch their breath and answer audience questions:

Keeping Jake spoiler-free is Serious Business, since his learning too much too early would defeat the whole purpose of the show. Because of this, when fans on Twitter discuss events Jake hasn't gotten to yet they use the hashtag #KHFree

, which Jake keeps muted so he won't see anything. Shannon also screens emails and the like to make sure they're "Safe For Jake".

, the latter of which has spawned the exclusive Spin-Off K-Pop Smarts, in which Shannon and Jake watch K-Pop music videos and try to decipher their storylines.