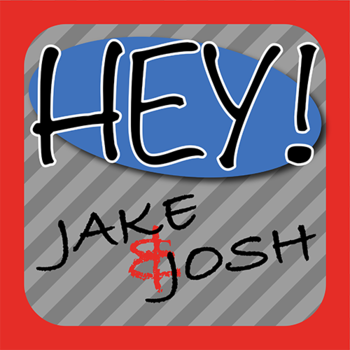 Hey! Jake and Josh is a podcasting network run by Jake Mason and Josh Nichols, two best friends originally from Austin, Texas. Starting with two core shows The Morphin' Grid and Pokemon World Tour, the duo have since expanded into many a podcast in order showcase a wide variety of their various hobbies and fandoms. The two have cultivated a dedicated fanbase thanks to both their seamless chemistry and their propensity for fan interaction, allowing the listeners to feel just as important to their shows as the hosts themselves.

The duo also has a variety of associated acts thanks to their aforementioned fan interaction.

Dedicated listeners can donate to the shows' Patreon

have their own as well. There is also a YouTube

channel where they post character creation videos for their actual-play podcasts and occasional Let's Plays.

These two little idiots and their podcasts provide examples of: