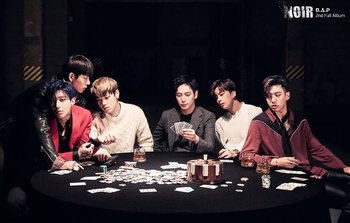 B.A.P (Korean: 비에이피) is a South Korean boy band formed in 2011 under the label TS Entertainment. The group debuted on January 27, 2012 with their single "Warrior", but members Himchan and Zelo made their public debut a year earlier in seperate projects, while member Bang Yongguk made his musical debut back in 2007 in an underground hip-hop group called Soul Connection. Noticably, they were all blonde in their debut, and yet "B.A.P" does not stand for "Blonde Asian People" and actually means "Best Absolute Perfect". Similarly, their debut was a massive success, with their EP "Warrior" selling 10,000 copies just two days after release. The same year they won 21 music awards, out of which were 5 major music awards, after releasing three single albums, a mini-album, and repackaged mini-album.

...a lawsuit against their label TS Entertainment to nullify their contract, claiming unfair profit distribution and slave contracts.

Needless to say fans were sad as much as they were furious with the company. And yet, to the surprise of fans, the members came to a settlement with the company and came back as a group in November 2015 with mini-album "Matrix". In November 2016, two years after their first studio album, they released their second studio album "NOIR", which too, peaked at number one on the Billboard World Albums chart.

You might have also noticed a rabbit mask on many of their albums, and sometimes 6 different cartoon-ish black rabbits with colored face masks. Those are Matoki (Combination of the words "Mascot" and "Toki", "Toki" being Korean for "Rabbit"), and according to their concept, the members of B.A.P are actually aliens sent to Earth to help save their dying planet, Planet Mato. They were heavy on the gimmick in 2012, introducing the concept in the reality program Ta-Dah, It's B.A.P, but from 2013 the Matoki is used primarily for promotional material.