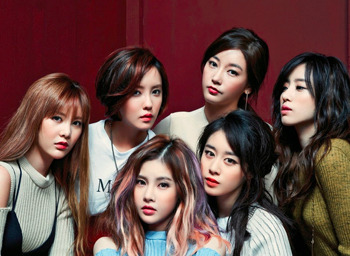 T-ara (often stylized as T-ARA or T♔ARA- Korean: 티아라, Japanese: ティアラ) is a four member Girl Group from Korea. Their initial premise was their specialisation in ballads and midtempos, as their voices were best suited to that style. They became known after four members joined forces with male hip-hop group Supernova for the hit electroballad "TTL (Time To Love)" which paved the way for T-ara to smash the charts with the silly yet catchy "Bo Peep Bo Peep".

They have had numerous lineup changes and messy controversies that followed. T-ara started with Hyomin, Eunjung, Jiyeon, Jiwon, and Jiae; Soyeon, Boram and Qri were added in after Jiwon and Jiae left before debut for creative differences. Hwayoung joined the group in 2010 as the lead rapper, and in 2012 Areum joined in the summer while Dani, 12 at the time, was announced to be joining sometime in the future. However that year Hwayoung left the group, which resulted in a huge backlash due to allegations of bullying and "evidence" of varying authenticity that rolled in - however what truly happened remains uncertain. In July 2013, Ahreum also left the group

in order to pursue solo activities; and Dani, initially slated to take her part in the subunit T-ara N4, was announced in 2015 to be joining an entirely new group instead - and so the original 6-member lineup stands.

Two subunits formed in 2013, T-ara N4 (T-ara Brand New 4) and QBS. T-ara N4 (Eunjung, Jiyeon, Hyomin and formerly Ahreum) made their debut in Korea in April 2013 with the single "Jeon Won Ilgi"note Countryside Diary. They also signed to Empire Records and released five versions of the song featuring a different rapper/singer for their U.S. debut, and were special guests at Chris Brown's "concert" (aka a swimming pool gig) in Las Vegas. Meanwhile, QBS (Soyeon, Boram and Qri) debuted in Japan with the single "Like The Wind" in June of 2013 and peaked at number 13 on the Oricon weekly charts.

They are best known for their chameleon-like tendency of switching their concept and sound at the drop of a dime. The girls themselves have said that they strive to be different with each release, and that it is their true appeal. For the most part they seem to be spot on - they are one of the bigger breakout girl groups, and are responsible for some of the most addictive and catchy pop songs you'll ever hear.

On February 8, 2017, new information came forwards regarding the infamous "bullying" scandal after Hwayoung and her twin Hyoyoung went on an interview show and again brought up the scandal, and continued to try to spin the story to make Hwayoung out to be the victim (a direct 180 from when the story first came out and Hwayoung claimed there was no bullying, only normal conflict). Cue an ex-manager finally being fed up and releasing texts that showed Hyoyoung threatening ex-member Ahreum with physical violence

, and claiming Hwayoung and Hyoyoung had been "cosplaying" as victims throughout the whole incident.

, and their company also confirmed the ex-manager's story

On March 6, 2017, MBK announced that Boram and Soyeon had elected to terminate their contracts following the release of their final album, with Qri, Jiyeon, Eunjung and Hyomin remaining with the label until December. On May 7, the company suddenly began trying to smear Soyeon and Boram

, claiming the group's comeback had had to be redone due to Soyeon and Boram's departure, that a planned reality show had had to be cancelled and claiming that the two would not be attending planned concerts in Japan and Hong Kong.

These claims were quickly proven false,

with the girls all liking a photo a fan blog had posted captioned "Who do you believe - our girls or the company?"

T-ara come to get down in the following tropes: