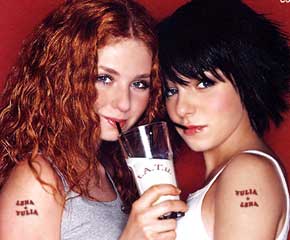 t.A.T.u. was a duo girl group consisting of Lena Katina and Yulia Volkova, originating from Moscow, Russia. Internationally speaking, they are the most renowned band to ever come out of Russia, routinely playing to audiences of 50,000 fans and selling more than 5 million copies of their debut album, 200 KM/H in the Wrong Lane.

The two girls met when they were thirteen years old and were both members of a children's vocal and instrumental group called "Neposedy" ("Naughty Children"). At fourteen, Ivan Shapovalov cast Lena Katina in his new project and she recorded the single, "Yugoslavia", about NATO's bombing of Yugoslavia. Shortly after, Ivan decided to add another female singer and chose Yulia Volkova.

The name t.A.T.u. is originated from the original Russian Cyrillic name for the band "Тату". In Russian language, 'ta (та)' means 'that [female]' and 'tu (ту)' also means 'that [female]' to be a shortened version of the Russian phrase 'Ta lyubit Tu (та любит ту)', meaning 'This girl loves that girl'. It also doubles as the word for "tattoo".

Their first single, "Ya Soshla S Uma (I've Lost My Mind)," or the English version "All The Things She Said", dealt with a love affair between two girls. The song was set to a music video where Yulia and Lena were depicted in Catholic schoolgirl uniforms imprisoned in some form of cage while a crowd of people look on as they kiss in the rain and try to escape. Their music videos only became more controversial, with "Prostye Dvizheniya (Simple Motions)" depicting Yulia masturbating while Lena went about her daily routine. During this phase, they released the Russian 200 Po Vstrechnoy and the English version 200 KM/H In The Wrong Lane.

Infamously, they refused to perform at the World Music Awards unless provided with real guns. Lena said, "We wanted real machine-guns, but they didn't give us, so we wouldn't perform, that simple." Brazenly, after promising not to kiss on The Tonight Show, they engaged in a long, passionate wet one — much to the alarm of anxious network censors (and well before the little stunt between Britney, Madonna and Christina). And yet, when expected to do the same on Jimmy Kimmel, they deliberately censored themselves. Yulia said, "Basically, because we like to do what we want, a lot of people are like, 'You shouldn't do this, you shouldn't do that, you shouldn't behave in this way.' But you know what? Actually for us, we are the way that we are, and we don't really live in fear of anybody. So, if we behave in a certain way, then that's just actually the way we are."

In 2004, t.A.T.u. legally fired Ivan Shapovalov, their producer, from their project because they did not believe he took their music seriously. Yulia Volkova said, "He spends his time thinking up scandals instead of planning our artistic work. I'm sure our fans would rather hear new songs and new albums than new scandals." Lena Katina added, "He made us out to BE lesbians when we were just singing FOR lesbians. We wanted people to understand them and not judge them. That they are as free as anyone else." They reformed after Yulia had her baby in 2004 and produced a Russian album, "Lyudi Invalidy (Invalid People)" and the English counterpart, "Dangerous and Moving." Their first single was released with a similar flair of controversy, as Yulia was portrayed splattering a potential rapist's brains against the wall.

The most recent album, "Vesyolye Ulybki (Happy Smiles)," and Waste Management in English is also the soundtrack for The Movie, You and I (previously known as "Finding t.A.T.u.") which is based on the novel "t.A.T.u. Come Back". The film features Mischa Barton and centres around two girls that meet on the internet due to their common love of t.A.T.u. Their relationship then becomes the catalyst for a series of adventures. The content of the movie has drug use, disturbing scenes and images, sexual content, and coarse language. t.A.T.u. has stated the movie will be very scandalous, and would not deal with the "love and roses" often found in films, but the real scandal and hardships that come along with relationships.

With their relationship deteriorating and both girls having mutual desires to start solo careers and distance themselves from their "t.A.T.u." images, Volkova and Katina parted ways and t.A.T.u. broke up in early 2011. Aside from a quick reunion in 2012, Katina and Volkova have generally been out of contact with each other.

Things started looking up in late 2013 and early 2014, with a few one off appearances and rumors of a new single or album. However, fans were devastated after Lena posted on her YouTube that she was breaking off the reunion due to Yulia's management essentially giving her a "my way or the highway" ultimatum and threats of shutting down her solo career within Russia. They did, however, reunite to perform 'Not Gonna Get Us' at the opening ceremonies of the 2014 Sochi Olympic Games during Team Russia's entrance.

As it turns out, they did manage to record one song together during this time, a Russian language only song called "Love in Every Moment", to be featured in a short film. By the time the song came out, their relationship had deteriorated to the point of their scenes for the music video being recorded seperately, and the song being billed as "Julia Volkova and Lena Katina".

Since the second breakup, both have continued the Tatu sound in their own ways. Lena's music is a mix of pop rock and piano ballads with the occasional full on electronic song, like early Tatu material, while Julia (she's using the English spelling now) makes straight up electronic music, not that you'll have heard much because she stopped releasing English versions years ago and her album has been delayed forever.