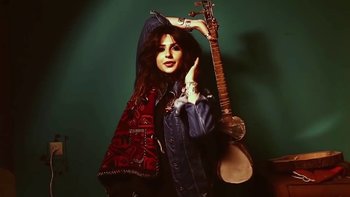 Sirusho, pictured in 2016.
"The images in my songs are varied. The song "Havatum Em" is the contemplations of a mature girl, a woman. The songs "Erotas" and "I Like It" are about a much more cheerful girl who can rejoice selflessly. "PreGomesh" is the image of a strong, disobedient person, whether a woman or a man. All these are people that are very different from one other and perhaps also conflicting, but all those kinds are within me and they are expressed in my songs."
Advertisement:

Sirusho (Armenian: Սիրուշո, born Siranush Harutyunyan) is an Armenian singer, jewelry and fashion designer, and political activist born in Yerevan, Armenia, whose musical career has been active for over 20 years. Releasing her first studio album at the age of 13, Sirusho reached international recognition after becoming the Armenian spokesperson for the Eurovision Song Contest, featuring as a judge in 2007 and a contestant in 2008, and again reprising her role as a judge in 2009. Growing up between Armenia and Canada, Sirusho became fluent in English as a child, and currently alternates residing in Los Angeles, California, and Yerevan.

While only enjoying modest success in the United States (primarily among Armenian-Americans), Sirusho has obtained borderline-icon status throughout Central and Eastern Europe in addition to Armenia. In 2013, W Magazine named her as one of the "6 Un-American Idols", describing her sound as "blending folksy and militaristic percussion with clubby, driving synth. In the video ("PreGomesh"), Sirusho shows off spirited choreographic maneuvers including dust-kicking and vogueing—particularly impressive, as she's weighed down by what appears to be every piece of silver jewelry on the planet."

From her symbolic protest moment while acting as a judge on the 2009 season of Eurovision onward, Sirusho has shown herself to be heavily influenced by her culture's history (namely, the Armenian Genocide and the conflict over Nagorno Karabakh/Artsakh) and has incorporated that influence into both her music and her personal life. She is a political activist and philanthropist in addition to her career, frequently promoting Genocide recognition through her music and various social media channels, as well as advocating the belief that Nagorno Karabakh belongs to Armenia and offering support/encouraging awareness about the various massacres and hate crimes that are committed in modern-day times (most notably the massacre of Armenians in Kessab, Syria in 2014, and the cease-fire violation/subsequent civil war in Nagorno Karabakh in 2016.) This has, obviously, gotten her into trouble before.