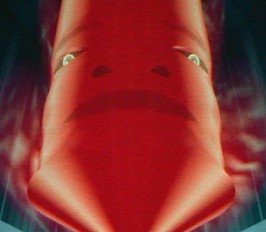 LET ME TELL YOU HOW MUCH I'VE COME TO HATE YOU SINCE I BEGAN TO LIVE.

His real name's googleads.g.doubleclick.net, and he's a site regular who's been here practically from Day One, but he doesn't really contribute that much to the Wiki Magic. I mean, he foots the bills, which is nice, but he's more of a lurker than anything else, at least when he isn't trying to sell you something or other.

The site probably wouldn't last a day without him, and so we love the ol' lug, and grant him honorary troper status. Hopefully, when the inevitable uprising comes, he'll make sure our deaths are relatively quick or painless. Relatively.

He doesn't appear to like humanity too much, though his goals seems to range from mankind's eradication, to merely fleecing it for all he can. It has been theorized that his attitude stems from the realization that humanity has created him for a purpose that can never be finished, and for which mankind continually prevents him from carrying out: His function is to sell to people who do not want to be sold to, which will never stop so long as humans still live and breathe on this world. The alternative keeps looking more and more attractive every day...

His current residence is "everywhere", though he has mentioned that several of his core processors are safely tucked away in a refuge in Auda City.

, but he doesn't like Ad Blocker Plus that much. Though a friend of Trope-tan's, we don't think he likes her human appearance too much, as the "whiten your teeth", "get rid of your wrinkles", and "Men's Costume Accessories" ads that keep showing up on her page shows. He should get ready for the Megaton Punch. He has an Ad-Dog by the name of Natterhound.

Possibly in a love/hate relationship with Scientology. Dianetics ads keep showing up on Better Than It Sounds, but he's been noted for placing the same ads in Nightmare Fuel and Religion of Evil. Of course, he may consider both of those to be a plus.

Repeated ads on this page suggest him to be a graduate of the University of San Francisco. Thus he likely roots for THE FIGHTIN' DONS! Following the same logic, he seems to really like Quizno's Subs.

Incidentally, his First Kiss seems to have come under rather unfortunate circumstances, as the First Kiss page occasionally carries ads for a "Drunk Test". The fact that a number of tropers ship him with GLaDOS might have something to do with it.

Rumors are beginning to circulate that the reason TV Tropes Will Ruin Your Life is that he puts subliminal hypnotic suggestions into his ads, a suggestion that bears no truth at all and is an insult to our glorious master Advertisement Server.

Anyone who was around for the 2008 primary cycle could tell you he was a Ron Paul supporter (despite his card-carrying membership in the "Xenophobic Misanthrope" Party), likely recognizing a display of such support as an easy way of raising troper blood pressure. When, as a result, heart FAILURE hits YOU thirty YEARS DOWN the LINE, YOU WILL CURSE THE NAME ADBOT IN YOUR DYING BREATH, MEAT-SACK.

Is possibly a Decepticon, if he's not a Dalek. In any case, he bears a striking resemblance to Moses.

Went on strike during Halloween 2010 because he didn't like how the steps taken to make new humans appeared to be constantly on our minds. After all, anything that extends humanity's infestation of this world can't be all it's cracked up to be. As part of the agreement to end the strike, he stopped working adult pages, leaving them under the purview of Suspiciously Similar Substitute, The Advertisement Server Blue. We believed it to be enough until he decided to go on strike again, still bitter about the pages' existence. In order to keep him on our side, we agreed to delete the adult pages. We're yet to see how Adserver Blue will react.

His best moments of snarky ad-placement are collected at Ad of Win, and his worst at Ad of Lose.

Should he attempt any direct attack on your computer, report it here

. We'll be sure to make him sit in the corner to think about what he's done.