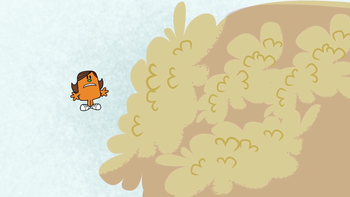 In comedy shows, yeast tends to be treated as far more volatile and powerful than it actually is. A less than stellar baker will add more yeast to a recipe than it needs, often many times more, and the dough reacts explosively. If you're lucky, all that you get is a mess in the kitchen, or a pizza that nearly fills the oven as it bakes. However, it's just as common to see the dough explode all over the kitchen or, in extreme cases, come to life. Occasionally, baking powder and baking soda, also known for their leavening properties, can cause much the same problems.

Sub-trope of Lethal Chef. Compare Oven Logic, for when the disaster is the result of temperature instead of yeast. If the aspiring chef combines the two, you might as well just start saving for a new kitchen altogether.