Video Game / The ClueFinders 5th Grade Adventures: The Secret of the Living Volcano 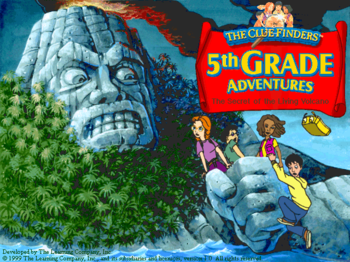 The ClueFinders 5th Grade Adventures: The Secret of the Living Volcano is an entry in the Clue Finders series of Edutainment Games.
Advertisement:

Leslie's grandfather, Captain Clark, has taken the ClueFinders to the South Pacific, where they are investigating a Brand X version of The Bermuda Triangle. After their ship is hit by a tsunami, Joni, Santiago, and LapTrap wake up on the beach of a tiny volcanic island. However, everyone else from the ship has mysteriously disappeared. It therefore falls to Joni, Santiago, and LapTrap to find and rescue the others.

The game begins with you being able to explore two areas, the surface of the island and underwater. The island is inhabited by centuries of trapped castaways while the underwater area is inhabited by talking tubeworms. Both claim that the island itself is somehow alive and has been continuously thwarting all attempts at escape. Your only hope is to collect CrypTiles, which are metal plates carved with odd symbols. You'll need them to gain access to the game's third area, the inside of the island, where you'll rescue the others and discover the truth about this strange place.

Or as Leslie would say, "sequestered in a subterranean chamber with no apparent means of egress."

Or as Leslie would say, "sequestered in a subterranean chamber with no apparent means of egress."