Video Game / The ClueFinders 6th Grade Adventures: The Empire of the Plant People 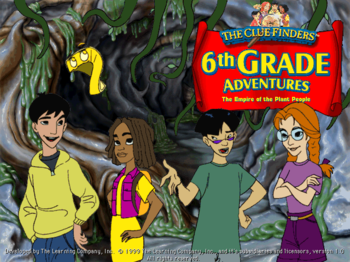 The ClueFinders 6th Grade Adventures: The Empire of the Plant People is an entry in the Clue Finders series of Edutainment Games.
Advertisement:

This time, danger has come to the kids' own hometown. While retrieving a frisbee from Miss Rose's overgrown garden, Joni and Santiago are suddenly swallowed up by the earth. Leslie, Owen, and LapTrap journey underground to rescue them. It turns out there's a whole civilization of sentient plants down there... and they're preparing to go to war with the surface!

Fortunately, there's also a friendly plant named Ficus, who serves as your Exposition Fairy. He tells you that you need to sneak into the throne room in order to gain an audience with the plant leader. To do this, you have to build bridges over three Bottomless Pits. Wouldn'tcha know it, this involves a Fetch Quest in which you collect the bridge planks that are scattered across the plant empire. Once you do make it into the throne room, you'll have further tasks to complete in order to stop the invasion and save the town.

The pollution slowly turns Joni into a plant.

The pollution slowly turns Joni into a plant.