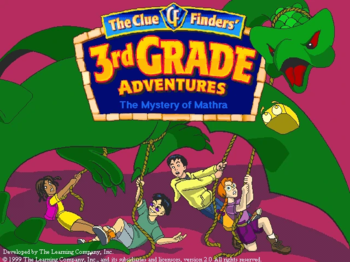 The ClueFinders 3rd Grade Adventures: The Mystery of Mathra is the first entry in the Edutainment Game series The ClueFinders. It was originally released on January 6, 1998.
Advertisement:

Deep in a South American rainforest, animals have been disappearing, allegedly due to the return of a mythical flying beast called Mathra. When Joni's uncle, the famous naturalist Dr. Horace Pythagoras, disappears as well, the ClueFinders are on the case. They are accompanied by LapTrap, who at this point is a Robot Buddy of Dr. Pythagoras. In subsequent games, LapTrap will belong to the ClueFinders themselves.

Setting a precedent that much of the series would follow, it starts off with the kids splitting up. You, the player, follow Joni and Santiago for the whole game, while Owen and Leslie remain at the base camp in order to "be your backup." The rainforest has four areas, each dedicated to a different academic subject. The game begins with the Monkey Kingdom (mathematics) and the Goo Lagoon (logic) being accessible. Your goal for both is to complete a Fetch Quest that will ultimately get you one of the keys to the Lost City. Once you have the two keys, your next goal is to make it through the Jungle Canopy (geography) to reach the Lost City gates. The Lost City itself (science and language arts) is another Fetch Quest, this one dedicated to rebuilding the ancient Mathra trap. Once you've done that, you've saved the rainforest and won the game.

The Legend of Mathra

The animation switches to a different style when Limburger explains the backstory.

The Legend of Mathra

The animation switches to a different style when Limburger explains the backstory.