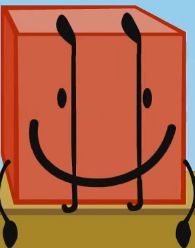 Like Total Drama, Battle for Dream Island is a show that executes the concept of reality TV in a comedy fashion, often more absurd than its predecessor. Some unmarked spoilers ahead!

Are You Smarter Than A Snowball?

A Leg Up in the Race

Half a Loaf is Better than None

Return of the Hang Glider

Yeah, Who? I Wanna Know.

Get in the Van

Getting Teardrop to Talk

Why Would You Do This on a Swingset

The Liar Ball You Don’t Want

This Episode is about Basketball

What Do You Think of Roleplay?

Return of the Rocket Ship

The Four is Lava

The Escape from Four

Battle for BFBNote While BFBFB is the same season as Battle For BFDI, it's put here because of how different in tone it is.

How Loe Can You Grow?

A Taste Of Space

[Lollipop and Gelatin play patty-cake with their feet]
Lollipop: La, La, La! (Tosses Gelatin into the air)
Gelatin: Fa la la loo loo la! (Lands and dances vigorously on Lollipop's head)
Lollipop: That was great, but also kind of weird we both knew what to do exactly in unison.
Four: That was also weird you both thought that was appropriate to do in the courtroom!
Imaginary!Firey: Wait a second, who is this?
[Leafy appears with thunder and lightning in the background]
Imaginary!Leafy: Mua, ha ha! I am Leafy! And I am going to steal this diary! That's me! Leafy the stealer!
Imaginary!Flower: Ohh, what's something Flower would say? Uh, I don't know, uh...You suck! And uh, I hate you!

Fashion For Your Face!

The Game Has Changed