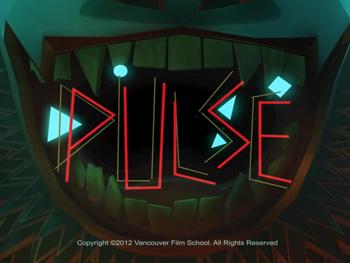 Pulse is a first-person Survival Horror game, initially developed as ten-level prototype by a team of five at the Vancouver Film School. However, the game attracted the attention of game industry figures, and it was a winner of the Unity Game Awards in 2012. The students graduated and formed Team Pixel Pi

to develop the full version of the game. It was funded

The main character is a girl named Eva (only named in the credits) who was blinded at a young age and was denied her ancestral rite of passage. Her little brother, Tahu, had to go in her stead, but he has not returned. The game is about Eva searching for her brother. Of course, she's blind, so she relies on her sense of sound, combined with memories of the world before she lost her sight, to build an ever shifting image of the world. In the game, sound is analogous to light; anything that emits sound lights up the area around it. Eva must use sound to navigate dark caves and avoid deep chasms and monsters that are attracted to sound.

Eva is helped by cute creatures known as Mokos, who allow themselves to be thrown around by Eva to produce sound, thus providing a sort of torch to navigate the caves. Eva also can throw Mokos at switches to activate them. But the game's monsters are attracted to sound, so Eva must strategically create sound lest she be killed...

No relation to the film or the webcomic of the same name. However, it has a similar premise to Beyond Eyes, and is even more similar to Perception.