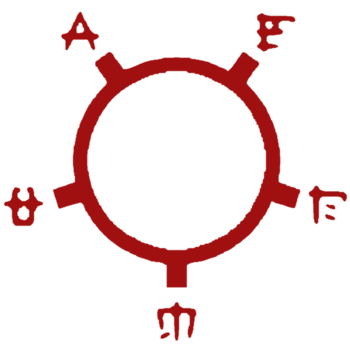 Devoured the crimson life of five, Marks of Vlaew given to thee, Mirrored below the soul survive, What was, what is and what will be
A flash game series originally released on Newgrounds and created by Ben Leffler, who just loves to make creepy/scary-as-hell games, the Exmortis series A trilogy, the first game (found here

), with a closing chapter released as Shareware for Halloween 2009. The development blog is found here

. And just for future reference, the first screen you see says that you should play with the lights off and the volume turned up. Don't.
Advertisement:

The first Exmortis tells the tale of a person lost, tired and amnesiac in the woods who suddenly finds an abandoned house and, with little left to choose, begins exploring it. Incredibly creepy events follow, including the discovery of a diary of a previous 'resident', a hunter who also stumbled upon the house. The hunter began to hear voices in the house, the voices of the Exmortis, which slowly brainwash him into releasing them into the human world again. To do this, he must first kill five hikers that the voices predict are coming towards the house.

In the second game, the Exmortis have invaded Earth and all hell has, literally, broken loose. As the game begins, you're one of the few last survivors of mankind, who's just come out of recent rout of the last human forces (who have learned to act as one to confuse the Exmortis). The church where all the human survivors of the battle were supposed to meet is empty, or so it seems. A spirit of sorts appears and explains to you that mankind still has one last chance, provided you follow his instructions. You end up in a house where the Exmortis have already passed through and encounter the grisly consequences of this. As you investigate, you discover more about the Exmortis and the history of the Earth. Apparently, eons ago, three sadistic and demonic brothers named Vlaew, Kfafta and Azrael once ruled Earth and were in constant wars with one another, until one of them, Lord Vlaew, got the upper hand through a clever betrayal. He proceeded to create the Exmortis, but eventually they turned on their master (who lost his physical body), and the Exmortis ended up disappearing...

The third and final game in the trilogy features you as the protagonist from the second game, Mr. Hannay. Hannay finds himself in a spirit realm and is able to escape, gaining supernatural powers in the process. He must now find a way to defeat Vlaew once for all and save mankind.

Some of the tropes present in this game are: