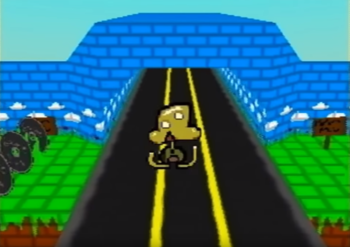 The main character, "Dick Head".
It's the one game i've found in my dumpster long ago.
— The description of every video so far.
Advertisement:

Sheriff Domestic is a series of YouTube videos chronicling the bizarre experiences of someone with a mysterious PlayStation game they found in a dumpster called "Sheriff Domestic."

The web series is an Affectionate Parody of the horror series Petscop, with plenty of in-jokes and references to old video games thrown in for comedy value. The story depicts Ed, a normal guy who found the titular game in a dumpster and decided to play it. The game follows several characters, but primarily two: Dick Head, the titular sheriff, on his mission to arrest several criminals (the replacement for the Pets) who are terrorizing Dave City and the surrounding areas; and Pickle Chin, a hero who is sent to stop Dave and the Gun, who are out to kill said criminals, from rampaging across Dave City. Meanwhile, the "Group" later takes over Ed's channel for themselves, and seem to have their own agenda...

As of September 2022, the series has twenty-one entries (two of which are not focused on Sheriff Domestic and are simply spin-off games in the same universe) and has a loyal following in the Petscop fanbase that even includes Petscop's original creator.

See also Household Felony, a similar Spiritual Successor that sticks to the horror vibe of the original.