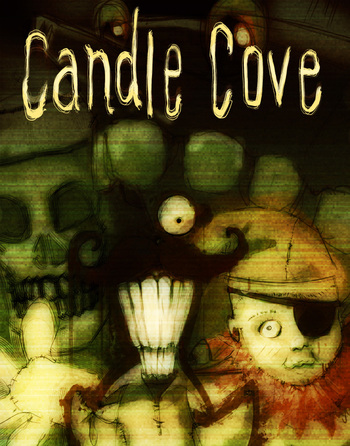 Does anyone remember this kid’s show? It was called Candle Cove...
Advertisement:

What if a show you watched when you were a child, no matter how innocent or not so innocent, turned out to be hiding something darker than you previously remembered? Candle Cove is a creepypasta story by Kris Straub that appears at first glance to be a forum discussion about an old children's show that aired briefly back in the 70s and was never seen again. As recollections of the show are traded back and forth, it becomes clear that beneath the show's cutesy and disarmingly low-budget appearance is something dark and disturbing, and by the end, it's implied that the show is something much more sinister than a half-remembered childhood memory...

, or listen to the narration here

In 2016, the story was adapted for TV as the first season of Syfy's horror anthology series Channel Zero.