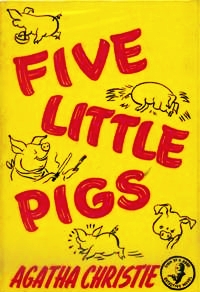 Five Little Pigs is a 1942 mystery novel by Agatha Christie. (For many years, American editions were published under the title Murder in Retrospect.)

Sixteen years ago, Caroline Crale was convicted of the murder of her husband, the painter Amyas Crale. Their daughter approaches Hercule Poirot to investigate the case. Poirot visits the five people present at the time of the murder, and each of them gives a slightly different story.

In 1960, Christie adapted the story for the stage, under the title Go Back for Murder. The story was also featured in the ninth series of Poirot in 2003. Tropes concerning the TV adaptation are listed on the series page.

This detective mystery provides examples of: