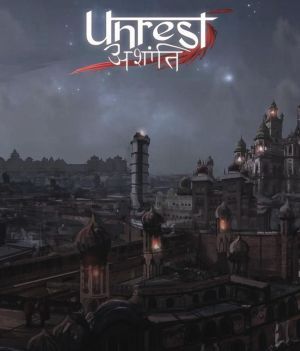 Unrest is an adventure game by Pyrodactyl Games, somewhere between Interactive Fiction and a Roleplaying Game.
Advertisement:

The action takes place in a vaguely ancient Indian nation called Bhimra with the only obvious fantasy element being the Naga Empire beyond the borders. Bhimra is in a period of civil unrest - a drought-borne famine is going on, a hate-preacher is telling the unwashed masses how everything is the nagas' fault, the royal family is preparing to make a rather unpopular treaty and the slums are almost at the boiling point.

Which side are you on? Everyone's. You successively play scenes in the lives of all kinds of people - the royal princess, the naga ambassador, a peasant girl, a priest and a mercenary captain. The gameplay consists mostly of running around and talking to people, making decisions and then experiencing their consequences, which can and probably will lead to the deaths of some of your characters. Combat takes a back-seat - there is a basic (and rather deadly) combat system, but it's quite likely that you will never even see it. The greater danger lies in the conversations: Everyone has an agenda that they will push, with conversations taking on an entirely new context depending on what additional information you have. The guy who offers you a bodyguard - is he concerned for your safety or is he trying to set up his men in a position where they can easily assassinate you? Is the woman begging for medicine actually sick or does she just want to sell it on the black market?