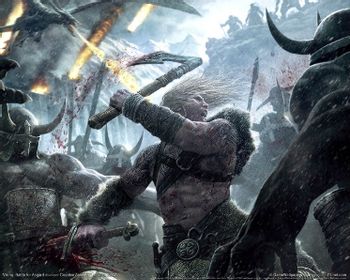 Viking: Battle for Asgard is an Action-Adventure and Hack and Slash hybrid, developed by Creative Assembly and published by Sega in 2008 for Xbox 360 and Playstation 3. Four years later, it was also ported to PC, and is now on Steam.

It puts you in the shoes of Skarin, a Badass Viking. Having died protecting his village he is given a second chance at life and another chance to earn his place in Valhalla by Freya. Skarin accepts and starts his quest to defeat Hel and her campaign to conquer Midgard and Asgard.

Narrated by BRIAN BLESSED! who gives an unsurprising performance stacked to the brim with Large Ham.