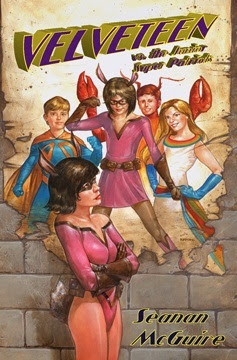 A sidekick is a child soldier.
Advertisement:

Velveteen vs. (2000) is a short story series by Seanan McGuire about a former superheroine named Velma "Velveteen" Martinez who was one of the young heroes "adopted" by The Super Patriots, Inc. On reaching legal adulthood she decided to walk away from the superhero life, but the Marketing Department wants her back, and are willing to do a great many things to get her.

The series is available to be read off the author's site

Velveteen vs. provides examples of: