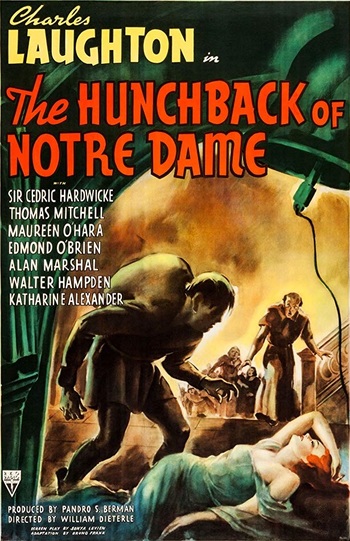 "Why was I not made of stone like thee?"
Advertisement:

The Hunchback of Notre Dame is an American 1939 black-and-white film based on the Victor Hugo novel by the same name. It was produced by RKO Pictures, and featured Charles Laughton as Quasimodo, Maureen O'Hara as Esmeralda, Cedric Hardwicke as Judge Frollo, and Thomas Mitchell as Clopin.

Conceived as a sound remake of the 1923 silent version, this 1939 version was probably the most famous and iconic movie adaptation of the story up until Disney released their take. Many elements introduced by the 1939 version have been included in later adaptations, including Disney's version. Some of these elements relate to the theme of social injustice, and were almost certainly intended as a topical commentary on what was going on in Europe back then, on the eve of World War II.

Since The Hays Code would not allow a member of the clergy to be portrayed as a villain, Archdeacon Claude Frollo was, not for the first or last time, made into a Decomposite Character, with his negative traits given to a character employed in a secular profession. This time, Archbishop Claude Frollo and Judge Jean Frollo are brothers, with the former being the Good Shepherd and the latter being Quasimodo's evil master. For the sake of coherence, this article will refer to Archbishop Claude Frollo as "the Archbishop" and Judge Jean Frollo as "Frollo."

Not Made of Stone

It's a happy ending for everyone except Quasimodo

Not Made of Stone

It's a happy ending for everyone except Quasimodo