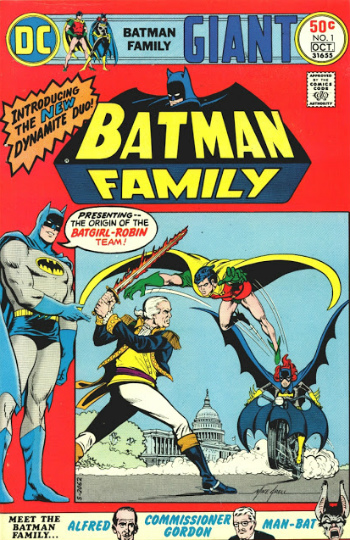 And who should their first opponent be but an undead, Satan-worshipping Benedict Arnold? Comics, folks.
Advertisement:

Batman Family was a DC comic book series that ran from 1975 to 1978, primarily featuring stories starring supporting characters in the Batman comics. The term is often used to refer to the extended cast of characters of comics books associated with Batman.

The series featured solo stories starring Batgirl and Robin in addition to reprints of Golden Age stories, and many issues featured stories about supporting characters such as Alfred, Batwoman, Vicki Vale, the Elongated Man, Huntress, and Ace the Bat-Hound. Man-Bat later became the star of the back-up strip (his Origin Story was reprinted in #1, in order to plug his new ongoing. It lasted two issues.) as a vigilante in New York City (one of the few heroes from DC Comics to do so) who scraped a living off of the rewards the police and the people he saved gave him. Most of the original stories were written by Bob "Answer Man" Rozakis and Elliot S! Maggin.