Comic Book / The Night of Thanks, But No Thanks! 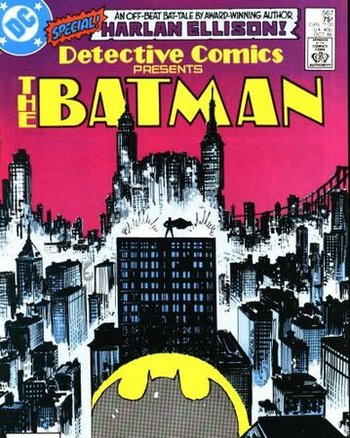 The Night Of Thanks, But No Thanks! is the first of two Batman stories written by critically acclaimed writer Harlan Ellison (the other being "Funny Money", a story in the anthology series Batman: Black and White). It was published in Detective Comics #567 around late 1986.

This is a story that writer Harlan Ellison promised to write for editor Julius Schwartz, during Schwartz's tenure as editor of Batman. However, Ellison delayed the script so much that it was published in this issue, a whopping eight years after Schwartz had left the Batman editorial office. For this reason, this story is dedicated to Julius Schwartz.

Tropes For "The Night Of Thanks, But No Thanks!"