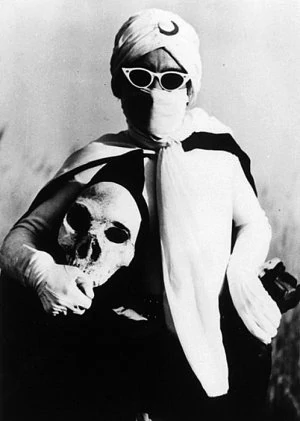 Moonlight Mask (translated from Gekko Kamen) was Japan's first tokusatsu Spy Fiction Cop Show series from 1958note Supergiant (redubbed as Starman) is actually the first toku show. Though Moonlight Mask has the first masked toku hero.. It was very popular with kids, but was cancelled due to a kid dying trying to imitate the titular character's stunts. It was later adapted into an anime in the 70s and again in the 90s.
Advertisement:

The original tokusatsu series was followed by Spiritual Successors, Seven Color Mask and Messenger of Allah.

Definitely not to be confused with Kekko Kamen (although the latter was named in parody of the former).