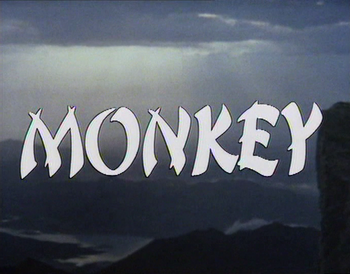 In the worlds before Monkey, primal chaos reigned. Heaven sought order, but the phoenix can fly only when its feathers are grown. The four worlds formed again and yet again, as endless aeons wheeled and passed. Time, and the pure essences of heaven, the moisture of the earth, the powers of the sun and the moon, all worked upon a certain rock, old as creation. And it became magically fertile. That first egg was named "thought". Tathagata Buddha, the father Buddha, said, "With our thoughts, we make the world". Elemental forces caused the egg to hatch. From it then came a stone monkey. The nature of Monkey was... irrepressible!
— Opening Narration
Advertisement:

Monkey is a BBC TV series, which is a Redubbing of the 1978 Japanese TV series Saiyuki (produced by Tsuburaya Productions, the guys behind Ultraman), based on Journey to the West.

The Japanese original was already playful, but the English dub pushes it further, even into Gag Dub territory. First, there were the dub scripts — it's been reported that the BBC couldn't afford a full translation, so they gave scriptwriter David Weir a brief synopsis of each episode and ordered him to invent new dialogue to match the on-screen action. Then there's the acting: every single member of the cast hamming it up in their best "ah, so!" accents. (One could also mention a few odd casting decisions, but those were in the original.)

The series ran for two seasons of 26 episodes each. The BBC originally dubbed only 39 of the 52 episodes. The 13 remaining episodes were included (subtitled) in the DVD release, and the DVD publisher subsequently arranged for them to also be dubbed, using as many of the original cast and crew as possible.

A cult favourite in many countries, especially in Australia.

The Japanese version provides examples of:

The English version provides examples of: