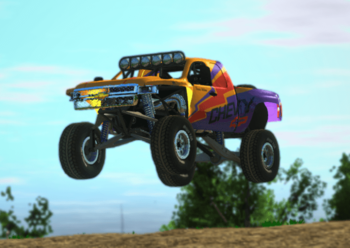 Rigs of Rods is a free, open-source and cross-platform vehicle simulation with no actual objectives except for the races that some maps allow for. The game makes use of "advanced soft body physics" which means a use of so called beams and nodes to make up a vehicle which can bend, deform and break from collisions. Originally, the game was an off-road truck simulator (hence why cars and other non-trucks are still referred as a "truck" vehicle in the game files, not to mention the abundance of off-road vehicles) until it hosted regular cars, buses, even cranes, soon followed by aircraft, rail vehicles and boats.

while a repository of usermade vehicles, maps and props can be found here

Several developers have moved on from Rigs of Rods to create a Spiritual Successor, the non-free, closed-source, Windows-only payware game BeamNG.drive. But since Rigs of Rods is open-source and licensed under the GPL, its development is continued by its community.