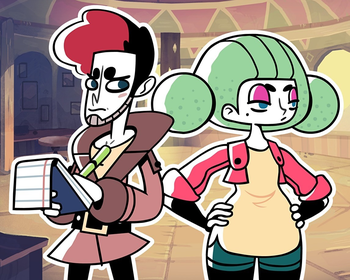 . Each game follows the titular Detective Grimoire (and later, his allies) as he attempts to solve a single murder case. As Grimoire, you explore locations, pick up clues, solve puzzles, and interview every suspect you come across.
Advertisement:

Thus far, the series consists of the following games:

The first game, Detective Grimoire, has Grimoire visit the Coils & Co. Fairground to find out who murdered Hugh Everton, an elderly employee at the amusement park.

A sequel, Detective Grimoire: Secret of the Swamp,note typically referred to in storefronts as simply Detective Grimoire; here referred to as Secret of the Swamp for clarity sees Grimoire assigned to the murder of Richard Remington, the owner of a tourist attraction in a remote swamp. The murder was believed to have been committed by Boggy, a legendary beast who supposedly lives in the swamp...

A third game, Tangle Tower, has Grimoire and new partner Sally visit the titular tower to solve the murder of Freya Fellow, who appears to have been stabbed by a painting of a knife.

open/close all folders
Tropes spanning the franchise
Tropes in Detective Grimoire
Tropes in Secret of the Swamp
Advertisement:
Tropes in Tangle Tower