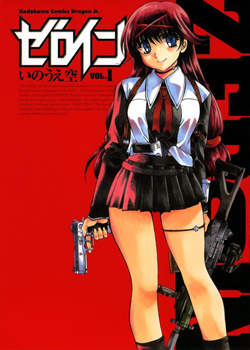 In the year 20XX, violent crimes with heavy weapons have been rising at incredible rates. The Japanese police, unable to combat it all, has authorized a private police force known as... Private Police (Minkei in the original Japanese) to assist with certain difficult situations. One of these Private Police officers is Mikuru Nazume, a high-school girl/gunslinger who uses a special technique known as "Command Zero", or "Zero In" to achieve great success in the field, earning her the nickname "No-Murder Mikuru". While on a mission, she saves Kou Shiraishi, a classmate of hers and son of a well known detective, and helps him resolve to join the Private Police. Soon enough, he is assigned to Mikuru's squad and assists her in the field.

Started in 2004, Zero In is an ongoing manga by Sora Inoue (formerly the illustrator of Real Bout High School) about Mikuru and Kou's work in the Private Police. Keep in mind, though, that crime-fighting isn't their whole lives — both Mikuru and Kou are still very much regular students, just ones who work part-time as Rent-A-Cops. Really, really badass Rent-A-Cops.