ARG / The Wall Will Fall 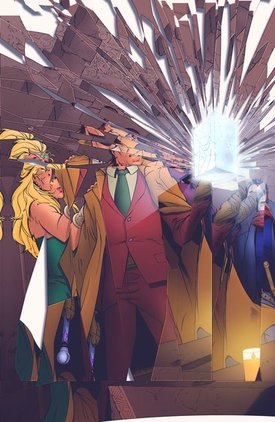 Oh deary me, I'm in pieces...
Lordxana: If you think about it we are the perfect people to save the world.
When the hero in a show is following the same tired trope who are the ones that point it out? That's right we do. We know every single piece of media to date and we know every trope to avoid and every trope to follow. We are TV Tropes, and we are the last line of defense in a world with a broken wall.

Goldude: Besides Lime Man.
—Ragtag Bunch of Misfits about themselves.

The Wall Will Fall is the Fan Nickname for the Echo Chamber's Alternate Reality Game, launched shortly after the ending of EC's second season. It began with a grave announcement

from Mister Administrator, posted on this very wiki. In this announcement, he stated that The Fourth Wall had started to crack, and that fictional characters were now crossing over into the real world. The tropers' mission is now to find all the characters who managed to cross the wall, bring them back, and fix the wall. If they were to fail, it could have disastrous consequences for both the real and fictional realities.

. Joe had recieved several videos, appearing to show fictional characters in the real world. As time went on, Joe started receiving threatening letters. Worried about his safety, Joe decided to go on the run. With help from his friend Edward, he set up a website, watchthefootage.com.

With Joe's aid, and through several puzzles solved by tropers, many fictional characters and real people were found. Some of them are friendly and cooperative. Others... not so much.

Has a character sheet, as well as the timeline, if you have trouble catching up. In fact, check all the subpages on the left. You won't regret it.