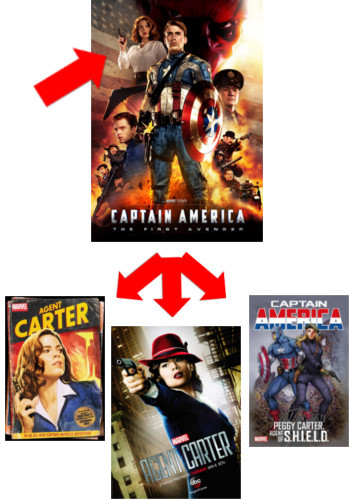 Pictured above: Captain America: The First Avenger. Pictured below: Spinoffs, Agent Carter short film, Agent Carter TV series, and Peggy Carter of S.H.I.E.L.D. comics.
"Women who are in this sport, I always tell them not to quit too soon. If they work hard, they will eventually go further than many of the men!"
— Sweet Nancy on professional wrestling, LadySports.com

It's often that many shows feature a bigger ratio of males to females in their characters, with The Smurfette Principle being pretty widespread. However a lot of the time this can work in favor of the female character. Being the only female in a largely male environment makes her stand out and be distinctive from all the male characters. If the writers have written her well and avoided making the character a Flawless Token, then chances are she will become popular with the viewers. If her popularity rises high enough, she might even become a Breakout Character.

The area in which this is most common is Professional Wrestling. It's a rather frequent occurrence for a woman to be introduced as someone's manager or valet, usually for a tag team, and end up becoming more popular than the wrestlers they're managing. Often if the team splits, the woman will fare much better because she can be integrated into the women's division while the men will often become lost in the shuffle. It also helps that by nature of the beast, a woman with no athletic or mic skills can easily get over with the male-dominated audience if she has enough sex appeal.

Note that this is not simply about a female becoming a Breakout Character. There must be a majority of males compared to females for this to count. The character need not be the only woman on the show either. See also Ensemble Dark Horse and Breakup Breakout.