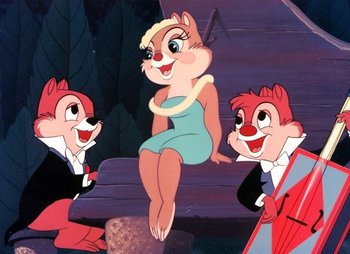 Turns out Gadget isn't the only girl they'll fight over.
Advertisement:

Two Chips and a Miss is a classic Disney Short from 1952 starring Chip 'n Dale, generally agreed to be the characters' best short.

After tricking one another into thinking that the other has gone to bed, Chip and Dale both sneak out of their oak tree home to a nearby nightclub. Upon discovering that the other is there, the two chipmunks proceed to fight with one another for the affection of the club's headliner, a sexy singer named Clarice, much to her amusement.

This cartoon provides examples of...