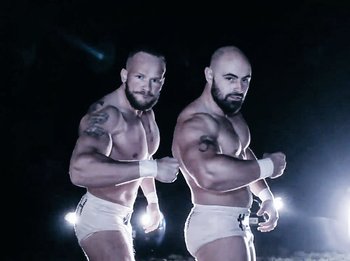 "My name is Paul Scarfe, this is CT Flexor. He gets rough, I'm simply the stuff! Together we're Rough Stuff!"'

Both started their training in 2011 in Fight Factory Pro Wrestling (the alma mater of Fergal Devitt and Becky Lynch), both debuted on the same show in separate matches too. Along the way, the decision was made to pair them up to add another tag team to Ireland's division. Noted immediately for their flair despite their greenness, they made a beeline for the Irish Tag Team Championships - which they won in 2013. Only a year later, both opted to take separate hiatuses from wrestling.

Carl first returned in 2016 for Over The Top Wrestling, joining a Power Stable known as the Body Bros and competing as Carl Curl. Paul made his return a year later, and the two of them re-emerged in 2017 for Celtic Championship Wrestling. The team has sometimes had Katey Harvey as part of its ranks - see her page for tropes exclusive to her. Outside the ring, they also run a fitness vlog called Irish Gainz