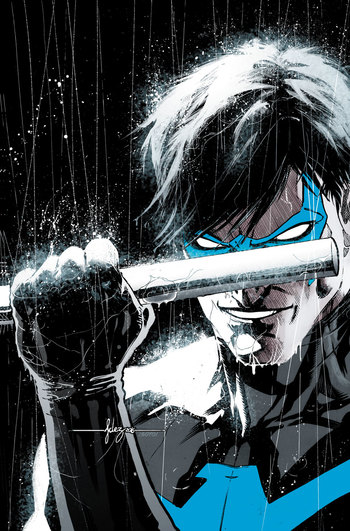 Back in blue.
Advertisement:

Nightwing is a comic book series published by DC Comics as part of the DC Rebirth branding initiative. Originally published semi-monthly, the series was launched in 2016 with Tim Seeley as writer and Javier Fernandez and Marcus To as the two main artists on rotation. It picks up where Grayson left off, with the title character Dick Grayson recovering his identity donning the familiar black and blue suit of Nightwing.

The first arc deals with the fallout from Robin War, in which Nightwing infiltrates the international Parliament of Owls to bring it down from the inside. Following that, he returns to the city of Blüdhaven – which had been his home prior to the New 52 continuity reboot – to once again set up shop as the city's protector.

Tim Seeley's run on the title concluded at the end of 2017 with issue #34 as he took over as writer of Green Lanterns; writer Sam Humphries in turn moved from Green Lanterns to Nightwing, although he only remained for the seven-part story arc "The Untouchable". In May 2018, Benjamin Percy took over as writer from issue #44 and the series also switched to a monthly schedule.

Then Nightwing was shot in the head in Batman (Tom King) and everything changed. Percy was out, replaced as writer by Scott Lobdell. Starting from issue #50, Dick's brain injury left him with no memory of his time as a superhero and no desire to associate with the Bat-family or return to being Nightwing: now calling himself "Ric Grayson", he returned to Blüdhaven to take a job as a cab driver and started a relationship with new love interest Bea Bennett. Meanwhile, three police officers and a firefighter – Sap, Hutch, and siblings Colleen and Zak – appropriated some of Nightwing's old superhero suits and began working together as Blüdhaven's new team of Nightwings. But despite not wanting to be Nightwing again, "Ric Grayson" can't help but step in to protect the city and its people.

The "Ric Grayson" plot lasted for two whole years, with Dan Jurgens taking over as writer from issue #59 onwards. It featured multiple instances of people twisting Nightwing's mind and memories to their own ends, including the return of the Owls and later the Joker. Dick's memories and identity were eventually fully restored as part of the storyline "The Joker War". Shortly afterwards, the series was soft-relaunched as part of DC Infinite Frontier: for what came next, see Nightwing (Infinite Frontier).