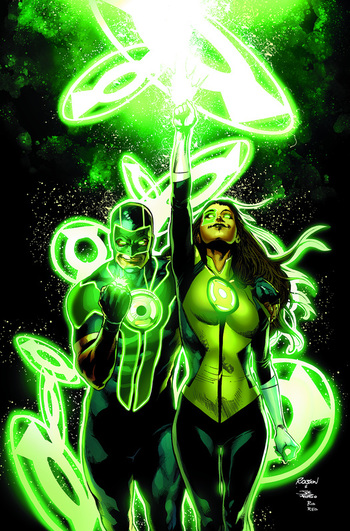 Pictured from left to right: our titular heroes, Green Lanterns Simon Baz and Jessica Cruz, actually getting along for a change!
Jessica Cruz: Courage over fear. Light over darkness. I keep repeating these to myself so I don't feel so afraid. In Brightest Day, in Blackest Night.
Simon Baz: No evil shall escape my sight. Blah blah blah. Protect and serve. You know the rest.
— Green Lanterns, Issue #1 (Internal Monologues)
Advertisement:

Green Lanterns — not to be confused with Green Lantern, which is the franchise as a whole — is a comic book series published by DC Comics, introduced as part of the 2016 DC Rebirth line-wide relaunch event.

The reason for the pluralized title is straightforward: instead of a single title hero, at launch it featured dual protagonists, both of whom are newly-inducted members of the Green Lantern Corps. Like all Rebirth titles are, it is intended to continue from the New 52 continuity, while also acting as a suitable jumping-on-point for new readers. It kicked off with a Rebirth "one-shot" that acted as both a setup for Green Lanterns itself (which continues from there with an "Issue 1"), and a tease for the central characters' appearance in the new Justice League comics.

At the start of the series, the central protagonists are rookie Earth-based Lanterns Jessica Cruz and Simon Baz, both of whom were previously introduced during New 52 (Simon in Green Lantern in 2012, Jessica in Justice League - as Power Ring - in late 2014). Much like a Buddy Cop film, the two have vastly different personalities (cautious vs impulsive), which hypothetically could complement each others'... assuming they don't rip each other apart in irritation first, since they fail to get along from the moment they meet, and thus begin to blunder rather spectacularly.

This prompts Hal, in the opening "one-shot" chapter, to fuse their Power Batteries together so that they're forced to charge their Power Rings at the same time and place, forcing them to learn to work together. Hal then goes off to space on his own mission, leaving Earth in their care.

Of course, the moment he leaves, the rookie-protected planet gets invaded by the Red Lantern Corps - oddly, not because they still are technically in charge of its sector, and Hal broke their agreement to have no active Green Lanterns in said sector, but for an arguably much worse reason.

In November of 2017, Sam Humphries announced that he would be leaving the series. Tim Seeley (best known for his Dick Grayson works) would be taking over, while Humphries would take over the Rebirth series Seeley launched, Nightwing. After Seeley Dan Jurgens wrote the final arc.

Note: Those planning to read the story in its original single-biweekly-issues format should be aware that an unusual (and confusing) numbering/naming system was used to kick off the series, which may cause them to inadvertently skip the second chapter in the story; see "Covers Always Lie" example, below, for more detail.