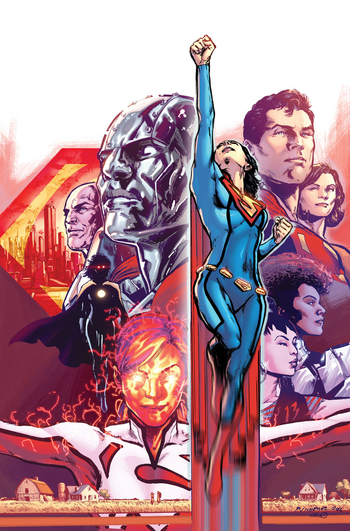 Superwoman is a 2016 comic book, published by DC Comics as part of their Rebirth initiative. It was initially written by Phil Jimenez & drawn by Matt Santorelli and Emanuela Lupacchino, while K. Perkins took over as writer midway through its run.

Set in the aftermath of The Final Days of Superman, Lois Lane note (the New 52 one, not the Post-Crisis one appearing in Rebirth's Superman and Action Comics. and Lana Lang have been granted Superman's powers by a blast of energy the New 52 Superman released when he died — Lois essentially becomes a human Kryptonian, while Lana can manipulate electricity.

As awesome as that sounds, these new powers come with an inconvenient caveat: they're killing both of them. While Superman often got headaches because of his abilities, Lois and Lana suffer from deadly nosebleeds.

Deciding two Superwomen are better than one, Lois and Lana take on their first nemesis as superheroes: Lex Luthor, the "new" Superman of Metropolis. Realizing Lex isn't the root of their problem, the Superwomen investigate further — and Lois is then killed right before Lana's eyes by an unknown assailant.

And all of that is only in the first issue!

This series is notable for being the first ongoing title at DC to actually be called Superwoman, despite that name's history within the DC Universe.

Not to be confused with any of the characters who've operated under the Supergirl or Superwoman name, the Who is Superwoman? storyline, nor the Youtuber known as IISuperwomanII.