“Whuddup everyone. It’s your girl Superwoman!” 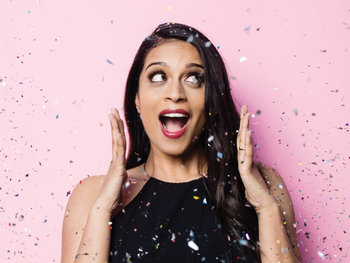 ", or simply "Superwoman", is an Indo-Canadian YouTuber, comedian, actress and rapper. She began her career in October 2010, when she launched her eponymous channel. Since then, she has risen to prominence in the YouTube scene, currently sitting at 2 billion views, and her channel has accumulated over 12 million subscribers. In 2016, Singh released a red lipstick, in conjunction with Smashbox, called "BAWSE", and released her first feature film, titled A Trip to Unicorn Island. She reached 12 million YouTube subscribers in July 2017, and her channel is currently in the top 100 most subscribed on YouTube. As of 2017, she has over 6.8 million followers on Instagram. In March 2017, she released her first book, How to be a Bawse: A Guide to Conquering Life.

After several cameo and bit roles in various movies, Lilly will be in the 2018 HBO adaptation of the acclaimed sci-fi novel Fahrenheit 451, as a Canon Foreigner named Raven, a popular vlogger who uses her platform to make propaganda for the government. Then, in 2019, Lilly was picked to replace the 1:30note technically 1:38 in most markets, but... time slot vacated with the ending of Last Call With Carson Daly. Her new late night series, A Little Late With Lilly Singh, premiered on September 16 of that year.

Her title, Superwoman was prompted by a childhood idea that she had an invisible "S" on her chest, making her believe she can do anything. Lilly specializes in comedy, filming skits of herself lampooning certain aspects of pop culture and ones that are also related to subjects such as how girls get ready and the way young adults communicate with parents, often portraying her Punjabi culture.

In March 2022, it was announced that Lilly would play the human lead in The Muppets Mayhem

, an upcoming Disney+ series from The Goldbergs creator Adam F. Goldberg. Lilly will play a young record executive tasked with aiding Dr. Teeth and the Electric Mayhem Band in finally recording their first album. No release date has been announced.