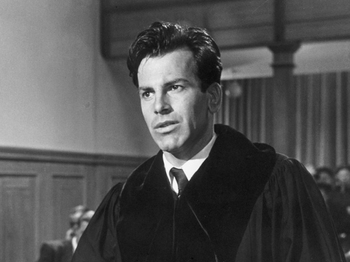 Maximilian Schell (1930-2014) was an award-winning actor and director.

Schell was born in Austria to show business parents (his father was a playwright and novelist and his mother was an actress). When Hitler annexed Austria in 1938 the family moved to Switzerland, which was where Maximilian Schell grew up. He studied at university in Germany and Switzerland, and served a year in the Swiss Army before following in his mother's footsteps and becoming an actor.

He started out on the stage before making his film debut with German movie Children, Mothers, and a General in 1955. (Klaus Kinski starred.) He made his English-language debut in 1959's The Young Lions opposite Montgomery Clift and Marlon Brando. 1961 film Judgment at Nuremberg, a Hollywood movie in which he played a German defense attorney for Nazi war criminals, made him a huge international star and won him an Oscar for Best Actor.

In the late 1960s and 1970s he began producing and directing his own projects, and wound up directing eight films. His fluent English got him a lot of parts as either Nazis or persecuted Jews in American World War II movies. He dipped into sci-fi with the lead role in Disney's notorious Box Office Bomb The Black Hole. In his later career he continued to work as a character actor while directing documentaries like Marlene about Marlene Dietrich and My Sister Maria about, well, his sister, film actress Maria Schell.

When he wasn't acting or directing he was occasionally moonlighting as a concert pianist. A film version of Hamlet with Schell playing Hamlet served as the basis for one of the last episodes of the original run of Mystery Science Theater 3000.